To talk about the old pearl fisheries in the Sea of Cortez is to also talk about the Yaqui Indian Nation. No other native people in the Americas contributed as much as them during the long five Centuries hunt for black pearls. As a matter of fact, there are many stories and lore surrounding these hardship enduring natives of Sonora.  So this is just our small tribute to the Yaqui Indian Nation.

The Yaqui: Past and Present

The Yaqui Indian Nation is native to the State of Sonora, being found in large numbers near the "Yaqui River", to the south of the State near the cities of Guaymas, Obregon and Navojoa, although being a nomadic people they had a much wider distribution: northern Sinaloa, northern Sonora and even into southern Arizona (USA). Nowadays, Yaqui Indians can be found in their main traditional towns (Bácum, Vícam, Rárum, Huíviris, Pótam, Tórim, Cocórit and Belém) as well as in the cities of Guaymas, Obregón and Hermosillo, and even up north, in the town of "Pueblo Pascua Yaqui" (in Arizona, USA). The Yaqui were a war-like people, full of Pride and Courage, and maybe even the only native tribe in Mexico that did not yield under the weight of blows caused by Yori (both Spanish and Mexican) steel and gunpowder. They were considered to be "cunning as demons" by many of their adversaries, yet also naive by others. In any case, the combined attributes of an indomitable spirit and physical strength posed great difficulties for both Spanish and Mexican occupation of the Sonoran region. In the end, it was really "the Cross" (the Roman Catholic Church) the one that made it possible for Mexicans and Europeans to settle southern Sonora, and for the Yaqui to become a part of modern Mexico. 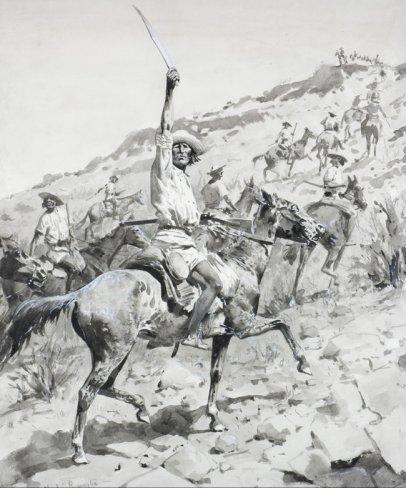 A rather interesting account of the first encounter between the Yaqui and the Spaniards: On the 4th of October of 1533, a group of Spanish soldiers (led by Captain Diego de Guzmán) met a group of Yaqui warriors on the margin of the Yaqui River. According to the Spaniards "The leader of the Yaqui was an old man, dressed in a black tunic lavishly adorned with both pearls and mother-of-pearl carvings in the shape of dogs, birds, deer and other animals" and then goes on saying: "The old man traced a line on the ground, and threatened with death at any intruder that dared cross it". Needless to say, the first bloody encounter between these cultures took place, and a sadly enough, these fierce encounters would continue well into the last days of the 20th Century. Today, most Yaqui Indians, as well as their mestizo or Mexican descendants, conserve most of their positive attributes, preserve and cherish their heritage and, of course, their continuous defiance towards injustice.

Some of these photos were taken from the beautiful murals found inside the State Government's Offices, in Hermosillo, Sonora, Mexico. When in this city, do visit the beautiful Cathedral, its park (Plaza Zaragoza) with a beautiful Gazebo and the aforementioned building. Very close by, you can also walk to the "Museo de las Culturas Indígenas" (Museum of Indigenous Cultures) also known as "Casa Hoeffer" and you can learn more about the Yaqui and other local Indian Nations. The Pearl Divers: No Yaqui, no Pearls

When the Spaniards made the first incursions into the Sonoran region in 1532 they met several of the native tribes in the area (for instance, the Yaqui, the Mayo and the Kom'Kaac) and observed that many of these natives made extensive use of pearls and mother-of-pearl shells on adornments and ritual gear. These discoveries helped to augment the stories of the great pearl beds and the large pearls to be found in the area.

Another account,  done in 1804, delves into the many commercial activities in which the Yaqui acted as laborers, stating that they were sought after by many Pearl Entrepreneurs since they where considered to be "excellent sailors and exceptional divers". Yaqui Indians departed Sonora -most of the time, unwillingly- every year to fish the rich pearl beds of lower California.

By 1895, some 8 to 10 boats with some 200 Yaqui divers were employed as pearl divers in La Paz and in Guaymas. The divers submerged themselves at depths of up to 10 or 12 fathoms, using their great strength to tear away the pearl shells. The divers came up with bloodied hands and feet, since they were not given any kind of tool to dislodge the oysters from the bottom (lest they use these against their boss).

According to certain authors, in the years between 1850 and 1890, the pearl fishing armadas consisted of over 800 Yaqui divers, but when the pearl bed populations declined, so did the number of nude divers. This "job" was quite risky, since many natives died every year due to diving accidents and shark attacks.
The women and children of the Yaqui divers were kept "employed" at the mining operations in Baja California, especially in those of the famous Boleo Mines. Yaqui divers spent their nights shackled together in many of the deserted isles of the Sea of Cortez. Accounts by sailors stated that it was not that uncommon to find Yaqui Indians swimming all the way back to Sonora, back to their freedom, but only after they had broken a few bones in their own ankles to dislodge their shackles.


The Legend of "El Mechudo" ("The Long Haired Yaqui")

Probably, one of the most famous of Mexican pearl divers was a Yaqui know as "El Mechudo", his real name now lost in time. He obtained his nickname thanks to a very long and thick matt of raven-black hair, which he tied up in a knot above his head, the rest of his hair falling down on him as if it was an umbrella. He was considered to be the best pearl diver of the time, thanks to his ability to obtain large and bountiful catches of giant Black-lipped oysters. On a certain occasion, at around the last few hours of a very bad day, "El Mechudo" came back from a dive and informed his "Jefe" (Boss) of a gigantic black-lipped that he had seen a glimpse of in really deep waters. The Boss urged him on to it -since that day's catch had been so meager- with the expectation of finding a large black beauty within the oyster. But bad weather had just moved in, "El Mechudo" refused to dive again. But the Boss went on, offering him an extra piece of dried meat for dinner, as an incentive. "El Mechudo" went once more into the salty embrace of those turquoise waters...never coming out again. But there was no time to find out what had happened to him...bad weather just made it impossible.

The next morning the fishing armada made it to the same spot and the divers plunged into the waters. A certain diver screamed out "I found him! I found him!" and every single diver moved into that spot. What they saw was a spectral image: the lifeless body of "El Mechudo" still clutching the giant oyster that had caught his hand in self-defense... his long hair had come loose and flowed all around him.

The place where this event happened is know, even to this day as "Punta El Mechudo" in Baja California Sur, near the city of La Paz. There are other versions of the story.


The First Aerial Bombardment in Mexico & the Americas

A seldom known fact about aviation warfare in the 20th Century is that the first Aerial Bombardment on Infantry in the Americas took place in Mexico, in one of the many wars waged against the Yaqui Indian Nation. In date of 1913, the Mexican Army prepared for yet another onslaught against the Yaqui. They had purchased three Blériot-type monoplanes, and had plans of using them to find and spy on the Yaqui forces.

One of the pilots flew over the enemy and noticed that the Yaqui seemed unafraid of his flying craft, so for the next flight he grabbed some dynamite sticks, ignited them and flung them into the fields of Yaqui fighters...causing death and chaos.
Later on, some Yaqui were captured by the Mexican army and were asked of their impressions about the bombardment. Their answer was a clever mix of utter defiance and ingenuity: "We are certainly not afraid of the 'Yori Bird' (Yori meaning "white man")...but you must be aware of the guano it sprays out!".

(Thanks must be given to Mr. Charles Jay of Phoenix, AZ, for his insider information and for sharing his knowledge on Aerial Plane Bombings).


Pearl Culture and the Yaqui

In 1893, hundreds of Yaqui Indians were employed as laborers in Gastón Vivés' famous pearl farm in the Island of "Espíritu Santo" in Baja California Sur, but when the farm was destroyed in 1914 most of them returned to other fields of hard labor: the mines, agriculture and local fisheries.

We are glad to say that the Yaqui are back in the “Pearl business”.  Most of our workforce are descendants of those same Yaqui that once dived into uncertainty in search of black pearls. Nowadays, they have respectable jobs and perform tasks of great importance for this nascent industry. The Yaqui are once more responsible for making these waters, the waters of the Sea of Cortez, bountiful with unique, colorful pearls.

Altogether, the life and times of the Yaqui have not been an easy one. But their endurance, perseverance and will of Life has made them one of the largest, best organized and most important -economically speaking- native culture in Mexico.